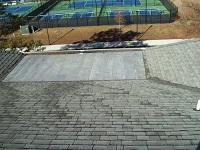 The original building that housed the Alexander II Magnet School in Macon, Ga., was completed in 1902. Several significant additions through the years have brought the entire facility up to 41,650 square feet. In June 2000, Alexander II was named to the list of 11 Most Endangered Historic Places by the National Trust for Historic Preservation.

“During an assessment, we discovered that the asphalt shingles were installed with no ventilation and heavy insulation,” says Jody Usry of Edifice Consulting in Byron, Ga., “It was designed for metal so with no ventilation, the shingles were burning up. And there was so much expansion and contraction that the nails were backing out in spots. It was decided that the best thing to do was retrofit with metal.”

The 138T standing seam system is a quick and efficient method for installing metal roofing directly over asphalt shingles, without an underlayment and without a tear-off. The system is designed around the patented clip paired with the company’s 138T symmetrical standing seam panel. Measuring 1-3/8 inches tall, the 138T is a two-piece mechanically seamed metal roofing system.

Combine this 3/4-inch airspace with vented eave and ridge material and you get a total uninterrupted air flow between the two roofs. Known as “above sheathing ventilation,” or ASV, this idea uses airspace to help reduce heat transfer. Testing at Oak Ridge National Laboratories (Tennessee) demonstrated how a free-flowing airspace between a metal roof and shingles can reduce heat transfer by 30 to 50 percent. Reducing heat transfer greatly reduces cooling costs, a savings for the building owner. During the winter months in colder climates, insulating the airspace will also reduce the chance of ice buildup caused by heat transfer up through the roof.

“There are a lot of trees around the school and the roof is subject to falling branches or trees,” Usry says. “Installing a symmetrical panel allows for the removal and replacement of individual panels that sustain any kind of damage, including falling branches. Obviously, it’s advantageous to the school to not have to tear off an entire roof for a couple of damaged panels.”

Usry says there were flat roofing areas with an internal gutter that were recovered with new decking and sloped to allow water to flow to an external gutter. All internal gutters were replaced. “Internal gutters are a detail that offers a high probability of being a problem,” Usry says.

Pittman Waller Roofing of Macon, Ga., installed the modified bitumen as well as 27,500 square feet of the 138T 24-gauge panels in PVDF Ash Gray. The panels were formed at the McElroy Metal manufacturing facility in Peachtree City, Ga. Because some spots of the decking were sagging, the roofers had to “shim” the roofing with 18-gauge framing.

“There were two areas in the roofing that were sagging about seven inches,” says John Pearson, president at Pittman Waller. “We shimmed it and you can’t even tell now.”

Pearson says this project was the first for his crews with the 138T symmetrical metal roofing panels, but the installation went very well. “With the caps, there’s more pieces, but once they got rolling, it was fine,” he says. “It was pretty simple to work with.”

Managing logistics was instrumental to the success of the project. The project started in January 2017 and completed the following July, so school was in session during most of the project. The safety of students, teachers and parents was a priority. And with the eaves 25-30 feet high, Pittman Waller crews required the use of two scissor lifts, a manlift and a couple of boom trucks.

“We made sure everything was safe,” Pearson says. “We had barricades along the eaves and everyone was wearing personal fall protection. The students and teachers were really good about avoiding areas where we were working, so it went smoothly.”

About McElroy Metal
Since 1963, McElroy Metal has served the construction industry with quality products and excellent customer service. The family-owned components manufacturer is headquartered in Bossier City, La., and has 12 manufacturing facilities across the United States. Quality, service and performance have been the cornerstone of McElroy Metal’s business philosophy and have contributed to the success of the company through the years. As a preferred service provider, these values will continue to be at the forefront of McElroy Metal’s model along with a strong focus on the customer. More information can be found at http://www.mcelroymetal.com. 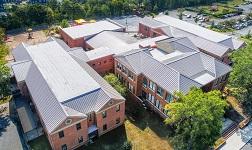 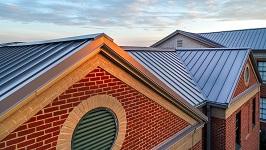 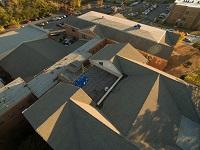 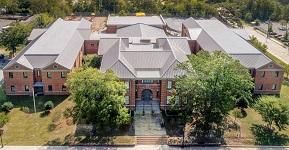